Rather than tell my group of Boys and Girls Club children (whom I refer to as my junior scientists, scientists, or kids) what a civil engineer was, Halil showed them. His lab at Iowa State University resembled a large warehouse. Finely powdered grey dust covered the floor, and on the lab benches were pieces of rock, chunks of concrete, gauges, and electrodes. We were surrounded by large pieces of equipment and giant plastic cylinders filled with sand and cement compounds. Halil’s grad students hovered around my junior scientists, handing them bits of limestone, powdered gypsum, and carbon fibers in plastic baggies. It was loud with excited kid energy, and Halil could barely keep up with all the questions they had for him. They touched, they explored, and absorbed the environment around them — learning about what civil engineers did, what concrete was made of, and how we could manipulate its properties to our advantage.

The room fell silent as my scientists watched with rapt attention between the thermal imaging screen and the block of concrete in front of them. There was a scoop of snow on top of the concrete, and as the electric coils conducted and warmed the concrete block — which we could easily see when the block turned from bluish to shades of red, orange, and yellow on the screen — the snow began to melt.

It was the middle of February when temperatures in Iowa easily reached a windchill of -25°F and below. We were all sick of the ice, and all of us (including the adult chaperones) felt a flicker of hope as we watched the snowmelt on the heated concrete in Halil’s lab.

The thing is, I could have talked about the heated pavement in less than a half-hour at the Boys and Girls Club. It would’ve been interesting, but I would’ve never gotten the response that one girl shared with me after our visit. She said, “I want a huge lab like that, where I can do lots of experiments with a bunch of machines.”

When I asked her if she was going to be a civil engineer, her cheeks glowed and there was a glimmer of mischief in her eye, as if I had discovered a valuable secret that she wanted me to know. “Maybe,” she said. But it was the kind of maybe that implied, “Maybe, but I want to explore my options.” She wanted more.

We Learn Through Interaction and Synthesis

I share this story to show how immersion and environment are powerfully influential to how we learn. We don’t learn in one place or in one way. Rather, we learn through our senses by interacting and synthesizing our experiences. Before our visit to the lab, my scientists had been experimenting with ways to make ice melt using mixtures of salt, sand, sugar, and other chemicals. Then once they went into the lab, they were immersed in an environment that gave them the experience of what civil engineers did and how it was important to our society. The lab environment did the teaching.

With little effort and deliberate intention on our part, classrooms have the potential to be powerful, motivating learning environments for our students. When I say learning environments, I’m not referring to an environment where people are supposed to learn. I’ve sat in many a lecture hall in front of Powerpoint slides where I’ve learned nothing. Instead, I’m talking about an environment that actively engages learning. I call these environments interactive spaces.

In interactive spaces, what is in our environment is just as important (if not more important, in some instances) for learning as the teacher. A classic example of an interactive space is a museum with interactive exhibits. These spaces don’t necessarily need the presence of a live teacher — they engage learning simply through the deliberate design and construction of the space.

Interactive spaces are based on the assumption that objects dictate the ways we act upon and around them. We learn through these interactions. For example, I have a science box at the Boys and Girls Club in my city. This box contains scissors, rulers, crayons, stickers, magnifying glasses, permanent markers, dry erase markers, watercolor markers, pencils, pens, sponges, paper, etc. It’s a toolbox that my scientists know that they can access at any time.

One time, a colleague of mine taught my scientists chromatography by showing them that when they write with a water-soluble marker on a coffee filter and placed it in water, the water would separate out the different-colored pigments in the ink. What she thought would be a five-minute demonstration blew up into a delightful hour-and-a-half experimental extravaganza because my scientists grabbed all the pens and markers out of the toolbox and did chromatography experiments on them!

Now, my colleague and I had never planned on having our junior scientists experiment with the different pens in the toolbox. It just happened that when my colleague showed the kids what to do, one of them looked up and said, “I’m going to do this with one of the permanent markers,” and he did.

As soon as he did this, others wanted to experiment with different kinds and colors of markers, as well (this is a classic example of effective social learning, by the way). The job my colleague and I had, at that point, was to simply add fuel to the fire with questions like: What did you try? What happened? Did you look at Shawna’s experiment? What did she do differently from yours, and what happened? What are you going to do next?

In the end, we asked our scientists questions to reflect on their experiments: “So what was the difference between a water-soluble marker, a dry erase marker, a permanent pen, pencil, and ballpoint pen? Were there differences in the different colors? Show us. Tell us!”

The objects, which in this case were the different pens in the toolbox, provided nonverbal prompts for kids to take their investigations further. Makerspaces work under the same philosophy. I take a rather critical view of makerspaces, however, because you must include scaffolds and prompts (e.g., the questions we asked of our students in the previous paragraph) to make the learning reflective and meaningful.

How Do We Create Interactive Classroom Spaces?

Start with asking the right questions. In his book, Teach Like a Pirate, Dave Burgess wrote, “The type of question determines the type of ideas your brain will receive and conceive…The critical process starts when you ask the right types of questions and then actively seek the answers.” Here are some questions to help you think about interactive spaces (and some potential answers):

Interactive spaces are not necessarily physical spaces. You can also create interactive virtual spaces that invite participation as well. The key to bringing interaction into your classroom and all of your learning spaces is to look at how objects prompt specific actions, and how you can use these actions to catalyze your students’ learning. 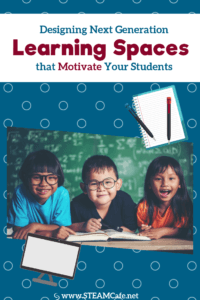 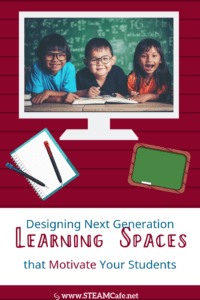 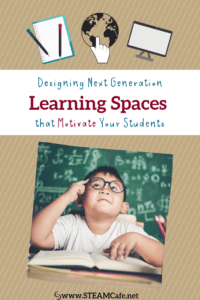